By James Mello
Celebrities nowadays do more than just entertain – they shape brands. Whether it’s reinventing themselves in their formal business or attributing their styles to a venture, stars are continuously searching for means to expand their charm and reach to their fans. One of the stars that has mastered this technique is Beyoncé Knowles. A multi-platinum, Grammy Award-winning recording artist who’s renowned for her thrilling vocals, videos, and live shows. Let’s take a look at her innovative marketing campaigns.

A Work Of Art, Or a Marketing Ploy?

Beyoncé released her fresh multimedia teaser film titled ‘Lemonade’ to complement the unveiling of her new album. The prime time HBO special broadcast instantaneously led to a significant online buzz as admirers worked to unravel her peculiar storytelling. It has now been two years since Beyoncé surprised the music industry with her self-titled album, which she released with no previous announcement. Due to this spontaneous move, she is now considered an innovator for marketing music, and has changed the way artists release albums forever.

Get Them Excited With Surprises

Startling fans with original music is a great technique to get them thrilled and help generate more publicity. In addition, complete secrecy has become a method which labels use to fight piracy, at least as much as they can, in order to turn a real profit from every release. Beyoncé surprised her fans yet again at the Super Bowl halftime show. On one of the biggest stages in the performing world, she amplified the attention on her brand with the release of her “Formation” single and accompanying video a day before the big game. After an outstanding show, Beyoncé even purchased air time to play a brief commercial announcing her plan to go on a world tour. It was a tour publication different than any before it, going viral and creating a fresh batch of headlines focused on the timing of the announcement.

The lessons learned from Beyoncé’s marketing moves can be applied pretty much anywhere, no matter the industry or the business type. Here is a breakdown of some key points that can be taken away from her phenomenal choices:

Today’s music industry is very single-driven. It’s expected for musicians to announce a single a few months in advance of an album release. The star is also expected to promote the single on the radio, release a video, and perform it live. Beyoncé’s unique approach challenges the traditional style by specifically not advertising lead singles. She created videos, but for all the tracks, and there were no prior performances of any of the songs. Most importantly, even the radio industry was surprised by the album’s release, which says a lot. Being unique leads to going viral. 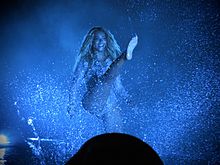 2. Building a loyal fan base

Beyoncé’s level of publicity is so high she doesn’t worry about attracting a new audience or even retaining the fans she currently has. The core success of any celeb is in a handful of brand advocates, a group of very loyal high profile admirers who provide full coverage. Having a fan base of loyal brand evangelists is worth implementing a massive marketing budget, as they essentially do the job for you. Creating flashy hashtags and symbols like Beyoncé’s the “Beyhive,” creates a sense of unity among fans. It’s one of the strongest social media symbols for Beyoncé fans, and it represents the most loyal fandoms in existence. All the star has to do is post one Instagram photo, or drop a teaser, and her fans transmit her all over the Internet.

3. Engage with your community

Brands, particularly in the entertainment industry, cultivate and strengthen a connection with the audience in order to promote their product. Artists inspire brand loyalty through engagement and communication with their fans by utilizing their music to connect to their fans. Beyoncé sings about where she came from, both geographically and metaphorically, opening the gates for her audience to connect with her a on a deeper level.  She made sure to share her life story through her song lyrics, along with video footage of her childhood. By announcing that she too has struggled and overcome obstacles in order to achieve fame and success, Beyoncé become more relatable to her fans.

If you’ve noticed, Beyoncé didn’t drop “Lemonade” without warning. She had been setting up for this release for more than six months. As an alternative to going with the predictable album release sequence, Beyoncé took her advertising campaign to the next level. She released the “Formation” music video one day before the Super Bowl. The day of she blew away her audience with the half-time show, and declared the Formation World Tour. A month later, she publicized her new clothing line, and a month after that, “Lemonade” premiered on HBO one day before the anticipated premiere of a new season of Game of Thrones.

Wherever the attention was aimed– Beyoncé was there to build up the hype. More importantly, Beyoncé chose to build momentum for her album release around events that were already significant to her audience. If you have an upcoming product unveiling, don’t just depend on press and media to spread the word. Start increasing the attention on your product by constructing momentum through original ideas. These lessons learned from Beyoncé’s unique and hugely successful career moves can be applied to any industry, product or service.